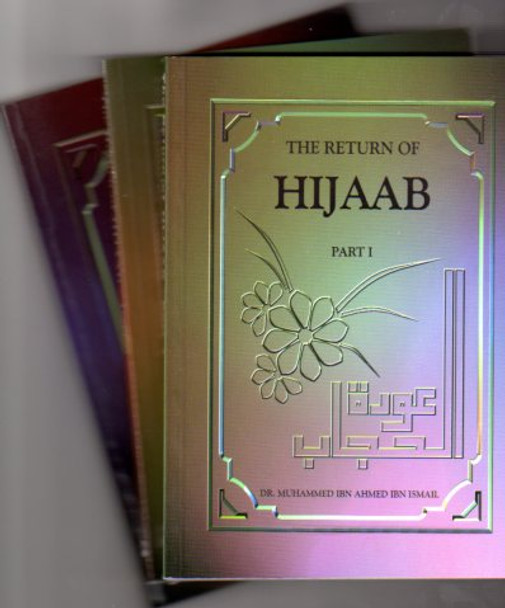 This book conveys some historical events that show the stages of conflicts, which developed at the end of the nineteenth century. This conflict, between Hijaab, veiling, andSufur, unveiling, (decency and depravity), has continued ever since.

This is part one of the series, (The Return of Hijaab), which will be followed, Allah Willing, by three other parts:
- The first one covers the treatment of two issues: 'Woman: a victim between two Jahili times' and 'The sun of Islam shines on Woman'.
- The second one includes: The meaning of Hijaab and its history - the novelty of the call to Sufur(unveiling) - Sufur and jealousy - Sufur and decency - Evidences from the Qur'an and the Sunnah of the Prophet (PBUH) regarding the obligation on woman to wear Hijab; the opinions of different trends of Fiqh, and a discussion on the suspicions of the opponents.
- The third one includes three comprehensive issues: Women's edcation, women's work, and the Command about women staying in their houses - May Allah help complete it.

The Men of Madina Vol 2 By Muhammad Ibn Sa'd

The Veil Evidence of Niqab By Dr. Muhammed Ibn Ismail

Price:
Sale Price: $119.95
Was:
Sunan Ibn Majah Urdu (5 Vol. Set) By Imam Muhammad Ibn Yazeed Ibn Majah Sunan Ibn Majah is one of the six most authentic collections of the Ahadith and contains 4,341 total Ahadith. Like the other...
13486

Battle of the Hijaab By Shaykh Muhammad Al-Imaa

Price:
Sale Price: $11.95
Was:
Battle of the Hijaab By Shaykh Muhammad Al-Imaa ISBN: 9781450773201 Discusses the current political scheming against hijaab and veiling, a situation which is pitching "liberal-minded"...
11548

The Battles of Badr and Uhud By Amal Khatab

Price:
Sale Price: $4.95
Was:
The Battles of Badr and Uhud By Amal Khatab ISBN: 9781842000845 Describes the first two decisive battles fought by the Prophet Muhammad and his small Muslim community, blessings and peace be...
11696

Price:
Sale Price: $11.95
Was:
The Hijaab (Jilbaab) of the Muslim Woman in the Quran and Sunnah By Al-Imaam Muhammad Naasir-ud-Deen al-Albaanee The Prophet (PBUH) said,"Surely Allah loves that when you do something; that you do...
11742

The Rudiments of Purification Vol 1 By Shadeed Muhammad

The Last Battle For The Truth By Abdassamad Clarke