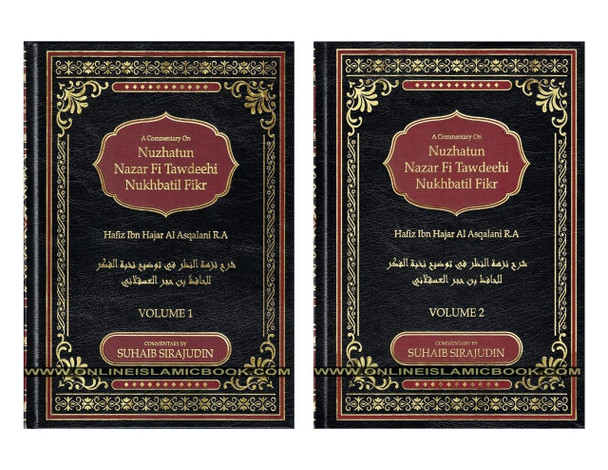 Althaugh Nuzhatun Nazr is itself an Explanation of Nukhbatil Fikr by Ibn Hajar himself; however it is still a very concise book that brings the early and the later schools of the Muhadithin together whit the most accepted method of approving hadiths as well denying the rejected.

Imam Ahmad ibn Ali al-Asqalani (d. 852/1448); famously known as Ibn Hajar after one of his ancestors is arguably the best hadith scholar of the Mamluk period. The Dhahabi of his time and the amir al-muminin of the hadith scholars.

Imam Suyuti says that he drank from the well of zamzam and prayed to Allah to give him more knowledge than Shams ad-Din adh-Dhahabi. He is the author of over 300 books some going into lengthy volumes.

He died on Friday 28 Dhi al-Hijja 852 hijri and was buried in al-Qarrafa; Cairo; now famously known as the City of the Dead (madinat al-mawta).

Shaykh Suhaib Sirajudin received his Degree in Islamic theology from Darul Uloom Al Arabiyya Al Islamiyyah; Bury (UK). He then continued his studies for a Degree in Software Engineering at Blackburn College; an associate college of Lancaster University; and for his Masters in Computer Security from the University of Liverpool.

He further studied for a Diploma in Counselling for marriage issues; Drugs; Stress and Family Counselling. After completing his studies he travelled to Saudi Arabia and taught at the Jubail University in Jubail; Eastern Province.

He is the author of the famous book 'Master Quranic Arabic In 24 Hours?'

Price:
Sale Price: $249.95
Was:
Fathul Bari-Sharah Sahih Al-Bukhari ,Complete in 2 volumes, By Hafiz Ibn Hajar Al-Askalani  And the Healthiest books after the Book of Allah Almighty is the book of Sahih of Imam Bukhari as...
13095