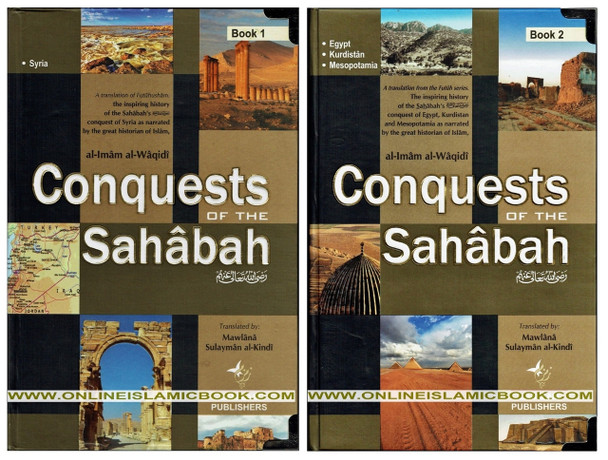 English translation of Futuh al-Sham, the inspiring history of the Sahabah's conquest of ash-Sham (which today includes Syria, Lebanon, Palestine Jordan, and other parts of Arabia, Iraq and Turkey) as narrated by the great historian al-Imam al-Waqidi. Events only briefly mentioned in other works are dealt with in detail here. The strategies of Khalid ibn al-Walid, the piety of Abu Ubaydah ibn al-Jarrah, the bravery of Dirar al-Kindi and many more are vividly described. This work also sheds light on lesser known aspects of Islamic history such as the significant role of women and Roman princes who embraced Islam. This book consists of 2 Volumes: Volume 1 Modern Day Syria Including Damascus Hims Al-Yarmuk Baytul Muqaddas Antioch Volume 2 Conquest of Memphis & Alexandria (Lower Egypt) Conquest of Kurdistan and Armenia Conquest of Mesopotamia (Iraq) Conquest of Upper Egypt English rendering by Maulana Sulayman al-Kindi of South Africa. Printed in superior quality paper and excellent typesetting. Book to treasure for personal use or give us gift. The author, Al-Imam al-Waqidi, the great historian, was born at the beginning of 130 Hijri in al Madinah, where he began his studies. He migrated to Iraq in 180 Hijri during the reign of Mamun ar-rashid. There Yahya al Barmaki welcomed him due to his great learning and he was included as one of Mamun's elite. He was soon appointed as judge and held this post until his death in 207 Hijri.

The Islamic Conquest of Syria By Al-Imam Al-Waqidi

Price:
Sale Price: $49.95
Was:
The explanation of Imam An Nawawi’s 40 Hadith 2 Volume Set by Shaykh Saalih Al Fawzaan   This is the commentary of Al Arba ‘in An-Nawawwiyyah (The forty hadith of Imam An-Nawawi) by Imam Yahya...
13838

365 Days with the Sahabah By Khalid Perwez

Goodnight Stories From the Lives of Sahabah By Mohd. Harun Rashid

Companions of the prophet 2 Volumes Set By Abdul Wahid Hamid

Price: $39.95
Sale Price: $35.95
Was: $39.95
Companions of the prophet 2 Volumes Set By Abdul Wahid Hamid This book set highlights aspects of the lives of sixty Companions of the Prophet, some famous, others almost completely unknown. Here the...
10982