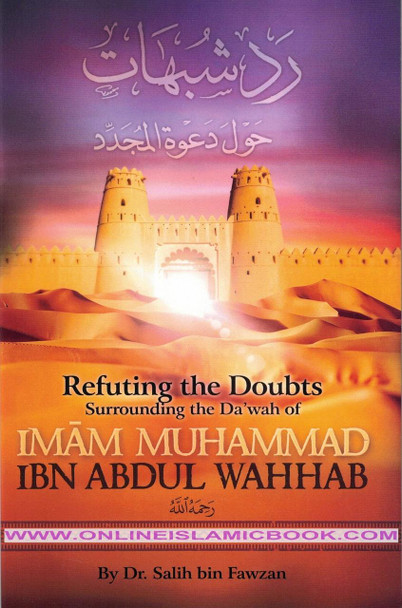 In this book the erudite scholar and doctor, Shaikh Sālih bin Fawzān al-Fawzān brings the story behind the life of one of the most notable scholars of the 18th century, Shaikh ul-Islām Muhammad ibn ‘Abdul-Wahhāb, may Allāh shower His Mercy upon him. Prophetic narrations state that in every era Allāh has placed scholars who remain firm upon calling to the Book of Allāh and upon enlightening the people in spite of the efforts of their opponents to dissuade or harm them.

Shaikh al-Fawzān states: “Each time there appears a caller to the truth, a caller from falsehood stands in opposition to him.” From these callers to the truth is the Imām and reviver of the religion, Shaikh Muhammad ibn ‘Abdul-Wahhāb.

Explantion Of The Conditions, Pillars And Obligations Of The Prayer By Muhammad b. Abdul Wahhab, Abdul Aziz ibn Baz, and Muhammad b. Salih al-Uthaymin

Price:
Sale Price: $21.95
Was:
Explanation of Muhammad ibn Abdul Wahabs Removal of Doubts By Imaam Muhammad Ibn Saalih al-Uthaymeen ISBN: 754097315324 So this is a concise explanation upon the book of Shaykhul-Islaam...
11883