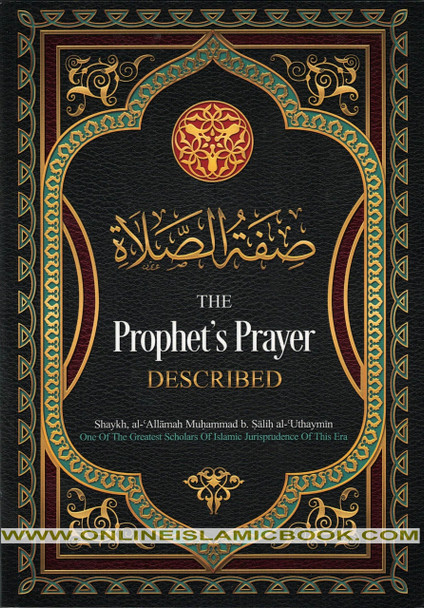 Description of the Prophet's Prayer

The first thing that the servant will be brought to account for on the Day of Resurrection from his actions will be the Prayer. Our Lord will say to His angels, and He knows best, 'Look at My Servant’s Prayer, did he complete it or was it deficient? If it is complete, then it will be recorded as complete. However, if there is any deficiency in it He will say, look and see whether my slave performed any supergatory Prayers: If he does have supergatory Prayers, He will say, 'Complete the obligatory Prayers of My servant from his supergatory Prayers: Then the rest of his deeds will be judged in a similar fashion:' Sahih Sunan Abu Dawud (no. 864)

In this book, al Allamah Muhammad b. Salih al-Uthaymin explains a number of vital issues related to the Prayer hi a very simple and comprehensive fashion. Not only does the Shaykh clarify the description of the Prayer, but he also expounds on finer details such as the meaning of the legislated supplications and remembrance articulated in the Prayer, which is highly beneficial to every Muslim, especially the English reader. This treatise provides the reader with accurate information based on the Qur’an and the Sunnah, so that the Muslim can actualize the saying of the Prophet (SAWS): "Pray as you have seen me pray:'

Some of the issues discussed are:

MSRP:
Now: $9.95
Was:
The Prophets Prayer Described From the Beginning to the End As Though You See It
11958

Salah-A Guide To Pray in Islam

MSRP:
Now: $11.95
Was:
Salah (A Guide To Prayer In Islam) The booklet is designed to teach new Muslims and non-practising Muslims how to offer the prayer. It also includes other related information such as preparing for...
12906

MSRP:
Now: $19.95
Was:
This book is an explanation of the classical and concise treatise of Imaam Muhammad bin 'Abdil-Wahhaab known as Masaa'il-ul-Jaahiliyyah or "Aspects of the Days of Ignorance." The source...
11017