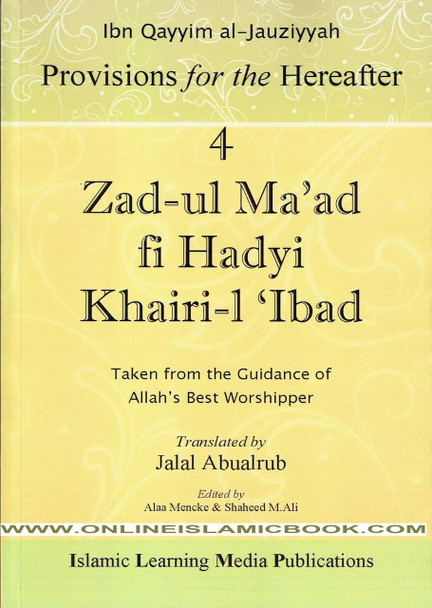 This book is one of the important resources of knowledge for those who seek to know the Seerah of their Prophet sallallaahu alayhi -wa-sallcun) as well as, the Fiqh learned from it, this is a book that is unique in that it explains the Sunnah through the Seerah and the seerah through the sunnah.

It is profound classic work _containing thousands of pages written by Imam Ibn Al Qayyum while on the Hajj journey (Pilgrimage), from Damascus to Makkah. Despite its being written from memory, the several thousand incidents, Hadiths, Ayat (verses of the Quran), Fiqh benefits, as well as, names of the companions associated with them, were remarkably close to the truth with marginal errors.

However, those who know the status, level of knowledge and tahqiq that Imam ibn al-Qayyim had, will not be surprised to know this fact. Still, it is amazing how Ibn Al-Qajyim was able to write this vast volume while traveling to Hajj (Pilgrimage) especially since he was away from the resources of knowledge and was enduring the hardships of travel. It is a blessing from Allah that it was possible for him to, do so.

This work reflects much of Ibn Qayyim al-Jauziyyah's efforts in defense of the Sunnah, and comprises a valuable resource for Fiqh and Seerah. This isn't merely a translation. Sh. Jalal Abualrub's footnotes appear to double the size of the books. At a minimum, he provides definitions of terms and provides references for hadiths. In addition, brief footnotes provide textual clarification and enhancement.

The majority of the footnotes, however, provide detailed topical expansion with supplemental hadith and commentary on those as well as on the hadith included by Ibn Qayyim. It is not unusual for a footnote related to a single sentence to comprise several pages of explanation, and provide valuable information on other than the topic at hand. For example, in Vol. 3, in the section on the Khutbah of Rassullallah (), Ibn Qayyim's statement that he "would then order and encourage his companions to give charity" is accompanied by two pages of footnotes that culminate in exposing the fallacy of those who would use a related hadith to claim that there is such a thing as good Bid'ah in Islam!

For his footnotes, Sh. Jalal relies heavily upon the works of the famous contemporary scholar Sh. Nasir-ad-Din al-Albani (rahimuhullah), on which reviews of the authenticity of the hadith are primarily based. Accordingly, documented information is included from all of the scholarly sources used by Sh. Al-Albani as well.

The Dunya and Its Reality By Ibn al-Qayyim

The Prophets of Allah Volume Volume 4 By Suhaib Hamid Ghazi